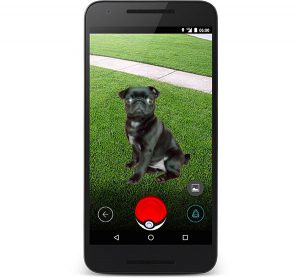 Players of the popular Pokemon Go game are accidentally capturing pets along with Pokemon, causing a nationwide panic and prompting Nintendo to disavow the actions of its players.

“We did not realize that so many American dog breeds strongly resemble the cute cartoonish monsters with which we populated the Pokemon Go virtual world,” said Nintendo Vice President Hitaro Arakida. “It’s your own damn fault. What did you do to these poor creatures to make them look like that?”

The Pokemon Go game is what’s called an ‘augmented reality’ game in which players see digital images superimposed on actual camera images of their environment. The terminology is considered questionable by experts who doubt that many players would recognize reality if it walked up and kicked them in the shins.

Pugs are particularly at risk of being mistaken for Pokemon, due to their enormous eyes, squashed misshapen faces, and slug-like bodies.

“I thought for sure it was some kind of potato monster,” said Brad Lovitz, who accidentally captured his neighbor’s pug Krystal Lite last week. “I wondered why it was so easy to catch.”

Captured pets are stored in “pokeballs”, little round digital spheres with no food, water, or bathroom facilities.

“Krystal stank to high heaven when I got her back!” fumed Wanda Rastin, whose pug is still “shaken” by the experience. “And now she runs away whenever she sees a ball. Well, waddles away. Okay, she sort of flops over and over in a given direction. But that’s how pugs roll, all right? They’re special! Who are you to judge them?”

Nintendo suggests that concerned pet owners keep their oddly proportioned animals inside for the next few months, until the public loses interest in the game.

“That doesn’t help,” said U.S. Secretary of the Interior Sally Jewell, “since other animals are at risk as well. Many Americans see so few animals in their normal lives that everything looks like a Pokemon to them.”

“I caught this big thing out on a farm that they tell me is a ‘cow’,” said Lovitz. “I mean, come on, what kind of name is that for a Pokemon?”