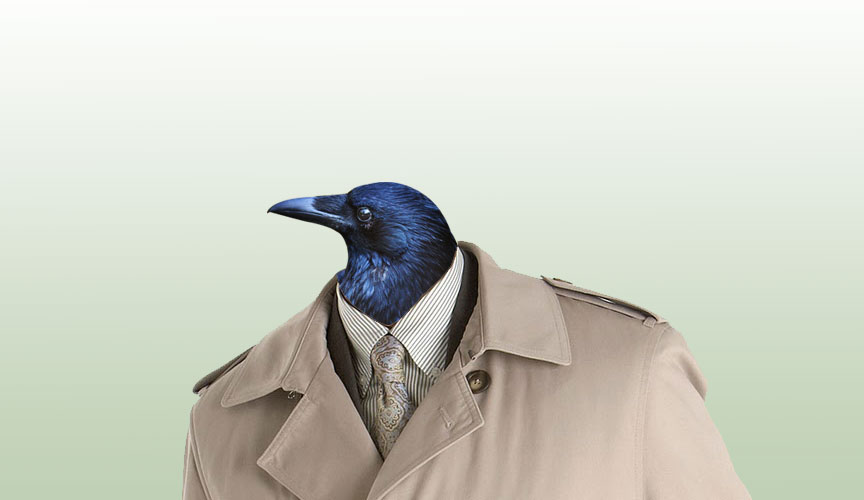 I regret to inform you that your CORVID-19 test came back negative once again. As this is the fifth time you have insisted we test you, and your interactions with our lab technicians have become increasingly strident and profanity-laden, allow me to explain in more detail precisely why you are not a stack of clever crows pretending to be a human being using a long coat and the gullibility of strangers.

TOOL USE: As you know, crows are among the few animals in the world able to successfully use tools. We saw your Instagram posts about your home improvement “bookshelf” project from May. It’s pretty clear you don’t know which end of the hammer to hold and that the final product is statistically certain to kill someone. The fact that three people liked the posts does not constitute a validation of your carpentry skills, especially as we are pretty sure one of the likes is from your mother.

FLIGHT: Your insistence that Delta’s passenger policies are “unreasonable” does not change the fact that you have not flown anywhere for at least twelve months, like everyone else. Possession of a travel pillow, a face mask, and a 1-oz. bag of pretzels does not constitute “proof of flight.”

FACIAL RECOGNITION: Crows are also known for their unerring ability to remember faces. During our test you repeatedly mistook Lady Gaga for Prime Minister Boris Johnson. It also appears that you have failed to recognize the fact that our clinic has only one receptionist, as you have told her on three separate occasions that “the other receptionist” said it was okay if you came in without making an appointment. For the record, it is not okay for you to come in without an appointment. Actual crows know this.

PLUMAGE: Crows have black feathers. While we appreciate the many links you have sent us from the Federalist and American Thinker, I must nonetheless point out the fact that crows are black in color is simply an empirical observation and not a question of affirmative action “using up all the good spots.” Plus, we didn’t believe you when you said “black lives matter” during your fourth visit because you didn’t seem to believe it yourself.

FAMILY ORIENTED: As a group, Corvus brachyrhynchos enjoy strong family relationships, in which extended families of crows communicate, teach, and nurture each other. Over the course of your five visits to our clinic, you left behind at least one child three times; on the third occurrence, you pretended when we called you that we had the wrong number by simulating a Spanish accent. For the record, the accent was pretty good, but it did not actually fool us.

While there are indeed many advantages to being a collection of wily birds, including a lack of eligibility for jury duty and the ability to freely head to Canada whenever they want, I must categorically affirm that you are not, nor have you ever been, a stack of clever crows. It is worth pointing out in any event that crows simulate a human appearance in this manner for no more than five minutes at a time, or the length of a typical Heckel and Jeckel animated short. Consequently I see no benefit to further CORVID-19 testing. Should you wish to test whether you are a pile of squirrels masquerading as a human, on the other hand, I can give you a referral.