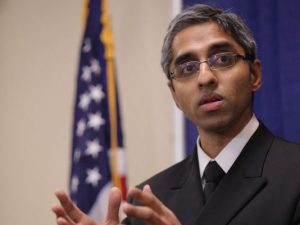 Vice Admiral Vivek Hallegere Murthy is urging people not to engage in drinking games during the second presidential debate tonight, arguing that thousands may be at risk of acute alcohol poisoning.

“I understand the temptation to take a shot whenever Trump says something misogynistic, or mentions that wall he wants to build, or insults a war veteran,” said Murthy. “But for God’s sake, the man’s gone off the rails. You’ll be dead within the hour if you do that.”

A surge of drinking-related casualties resulted from the first debate. Common drinking rubrics include drinking whenever Trump invents a new word, or claims he never said something which video evidence clearly indicates he did, or simply shouts “wrong!”

“Following this particular set of rules you’d be drinking an entire fifth of bourbon in the first twelve minutes of the debate,” said Murthy. “It’s just not safe, people.”

Some medical professionals argue that, on the contrary, it’s not safe to watch the debate sober, and caution that sensitive individuals “with a soul” should just avoid watching the debate altogether.