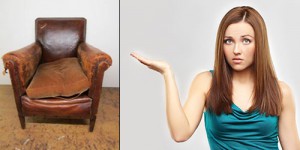 Aaron Greene, 26, is facing the greatest decision of his life as longtime live-in girlfriend Miranda Hendrick has put her foot down and demanded the ouster of Greene’s best friend, a decrepit armchair which he’s owned since he was a teen.

“Miranda’s great and all, but this chair has been with me forever,” said Greene, who has no sense of proportion and considers the early 2000s as prehistoric. “I mean, at the end of the day, she won’t always let me sit on her, but the chair never complains.”

“I’ve put up with a lot,” said Hendrick. “The X-box, the drinking, the Beanie Baby collectibles. I mean, you get a decent man, you have to expect a few bumps in the road. But I’ve reached a point where I can’t drown out the odor of the chair with even the strongest doses of Nicki Minaj’s Minajesty. That’s my go-to perfume for serious environmental problems.”

The chair, which is made of three kinds of leatherish material, wood, and some kind of crumbly foam manufactured from rendered horsehair, made its appearance in Greene’s garage when he was a sophomore in high school and was going to “make it big with his band.”

“It was great for crashing in after a really hard session,” said Greene. “I don’t really know where it came from, but it was, like, so non-judgmental.”

Since then the unwieldy chair, which weighs approximately 200 lbs and is prone to deposit both splinters and flakes of decaying leather and foam on the floor, has followed Greene to every house he’s occupied, often taking center stage in the living room “because it’s the most welcoming thing in the house.” The chair currently has pride of place opposite the X-box, lurking defiantly in the corner of the living room and scaring the cat.

“I think the chair hates me,” whispered Hendrick, with a worried glance at the malevolent heap of misshapen cushions. “I think Aaron talks to it sometimes, which is way creepy. And I think the chair talks back.”

The potentially possessed chair had no comment, but its pungent odor and aggressively decaying surface reminded this reporter that he had somewhere else to be and something better to do than write about a hideously funky chair and the dysfunctional relationship of a pair of entitled twenty-somethings arguing over the furniture.

“If I don’t survive the night, tell the police it was the chair,” said Hendrick. This reporter promises to do no such thing.