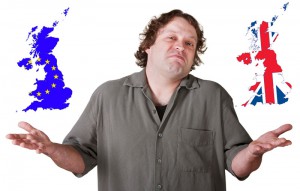 Faced with headlines screaming about the dire implications of Brexit, the United Kingdom’s vote to leave the European Union, Americans across the nation struggled mightily to understand what the fuss is all about.

“I know this is important, because Brexit is the most important meal of the day,” said Brittany Jessup, a junior in public policy at NYU, making a cute frown that caused a little vertical line between her impeccably groomed eyebrows. “And I like English Brexit, because they always have a lot of bacon and stuff. But Brunch is better, because of the mimosas.”

“Whatever the Brits do, ain’t no concern of ours,” said Charles McGinty, a truck driver from Chicago. “So, like, the Europeans were all invading and stuff, and the Brits said, hell with youse guys! And I respect that, even though the Brits are pansies with those fake accents. Who are they fooling, anyway? Huh?”

“Sounds to me like the English are taking a page from our book,” smirked Ebenezer Horlock, an insufferable hipster from Ashland, North Carolina. Ebenezer then twirled the end of his waxed mustache dramatically and took a deep drag on his vaping whatchamacallit, and that’s when I hit him, so I don’t know if he had anything more to say.

“I think the British have been misled by populist fear mongering,” said Melissa Yurt sadly, a ten-year-old girl running a lemonade stand in the Fila Horchata suburbs of Phoenix, Arizona. “It can be difficult to conduct a  thoughtful debate about issues which are both complex and racially charged in the context of a public referendum. I think one could argue that it was unfortunate that the British government opted to put such a vulnerable and important issue up for public vote.”

This reporter cannot take Yurt’s comments seriously, because the lemonade was warm, and honestly, if you can’t even keep the drinks cold, why should anyone listen to you?

Legendary monarch Arthur has returned from the misty timeless isle of Avalon, claiming that the uncertainty about the nation’s future leadership has prompted him to step out of his mystical retirement to save the nation and take up the mantle of King once more.

“I said I’d come back when things got really bad, and here I am,” said Arthur, the gleaming hilt of Excalibur at his side. “Something about a Trump. What’s a Trump?”

The near-mythical king appeared bemused by the lack of armor on the Secret Service detail which immediately surrounded his horse. Also, he apparently hadn’t heard of the American Revolution.

“But you guys used to be English, right?” persisted the king. “I mean, my divine mandate to rule is God-given. You folks in these colonies here can’t just decide to take it back with a show of hands. And face it: I wouldn’t be here if you didn’t need me.”

Presidential candidate Donald Trump, fresh off a rally in which he declared that Canada “had to go” and that he would declare organic food illegal once elected, made six mutually conflicting statements about the return of England’s ancient leader on the White House lawn. After first declaring the English to be our oldest allies, then stating that they owed us “big time” for World War II and were a bunch of debt-dodging, unwashed slackers, he gave an appallingly inaccurate and insulting impression of an Englishman drinking tea and wetting himself.

“I know all the kings, the best kings,” said Trump. “I’m basically a king myself, you know. Trump Tower is a lot nicer than Buckingham Palace which, by the way, is mostly filled with little dogs. This Arthur guy, I don’t know who he is, he’s certainly not as rich as me. Just look at his hair.”

President Obama welcomed the confused monarch into the White House, where the two sat in the Oval Office over mugs of ale and commiserated about being unappreciated. The President apparently explained numerous things to Arthur’s satisfaction (including television, basketball, and the election cycle), because afterwards the once and future king stated that he was going on a vacation before the election, to see what had changed in the United Kingdom and America since his disappearance in 468 A.D.

Democratic candidate Hillary Clinton sent Arthur an enormous fruit basket and asked if he would consider running as Vice-President on her ticket.