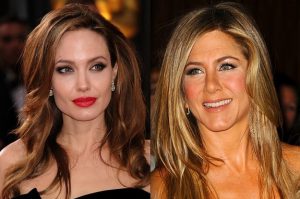 In a story which earned me a promotion and a timeshare in the Keys, it’s been reported that Jennifer Aniston called Angelina Jolie the minute the news broke of Jolie’s separation from husband Brad Pitt, to arrange for a steamy and very naughty hookup.

“We’re both finally free of Brad,” Aniston is reported to have said, as she firmly dismissed whatever non-Brad Pitt fellow she’s been dating or whatever. “Let’s face it: Angie and I have so much in common.”

The Jolie-Aniston-Pitt romance triangle has been the bread and butter of tabloid magazines everywhere for a decade. The photogenic trio has been splashed over more covers than the Kardashians, with headlines increasingly far-fetched and desperate as the years rolled on and all the participants appeared to have moved on like mature adults.

“That whole happy marriage thing between Brad and Angie was a serious bummer,” said someone who looked like Perez Hilton while doing lines of coke in the bathroom of an Applebee’s. “You can only use the word ‘Brangelina’ so often. Christ, happiness is boring. I’m so glad their lives are fucked up now. And taking a sexy, sexy direction.”

None of the sources alleging the affair between Jolie and Aniston have been confirmed, although nearly all the fanfiction online that doesn’t involve Harry Potter or vampires (and about half that does) describes the two Hollywood divas getting it on in imaginative and occasionally biologically impractical ways.

“True, false, it doesn’t matter,” said my editor while visibly salivating over a fresh set of Photoshop layouts with the two women. “We’re in a post-journalistic world. All we need is a good portmanteau and a bunch of pictures of these sexy, sexy ladies. How does ‘angelaniston’ sound? Or ‘jennijolie’?”