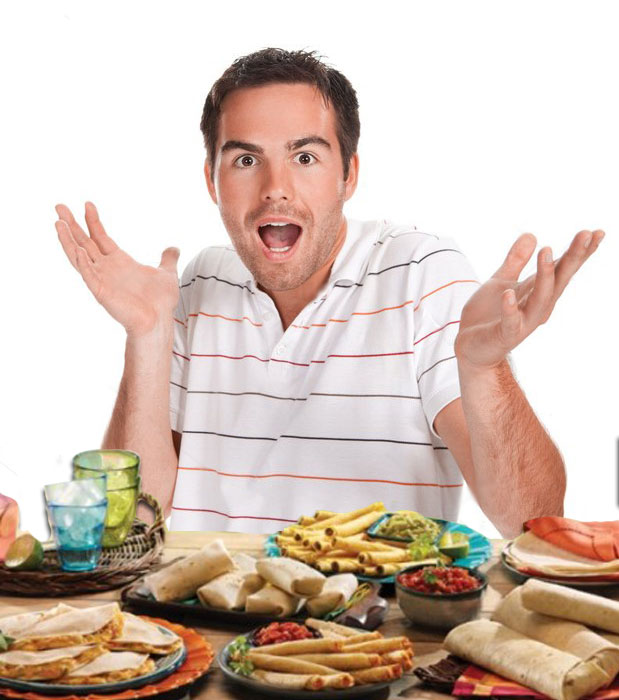 Hey. How did I end up in this reasonably priced Mexican restaurant? Well, I guess I could eat. What a funny coincidence!

Whoa, where did all these tacos come from? The Plata Gigantica? Looks like something I’d order! If you say I ordered a plate of fifteen tacos, I would have to agree with you that this sounds very consistent with my pattern of behavior thus far in my life. I don’t remember doing it, but the facts speak for themselves, don’t they! Don’t want to let those tacos get cold!

Margarita? Is that mine? I mean, I am due back at the office by one, but hey! – maybe a little tequila would make the sales meeting go a lot smoother, am I right? Wow, that went quick. I still have all these tacos to finish and nothing left to drink! Better get another one, just to keep things balanced.

Uh oh. Looks like the tacos are gone, and I still have half a margarita left! Can’t just chug the rest down. People would think I have a drinking problem! But it’s all right to drink with a meal. Let’s have some taquitos, I guess, and maybe a burrito just to round things out.

A fourth margarita? When did I have the third? Looks like Marty in Sales is gonna have to wait a little. It would be rude to refuse my kind hosts after they went to all the trouble of making this for me. It takes skill to salt the rim of a glass, you know! That’s craftsmanship! Artisanal bartending!

Wow. What time is it? I guess I’ve been here a while. You’ve gotta work your way through a pitcher slowly. Can’t drink a half gallon of Dos Equis straight down like that. It’s bad for your digestion!

Dinnertime already? Sure, I could eat.